One of the biggest mistakes beginning speakers make is to make their slides the focus of their attention. They may read from text on the slides or just put their focus on the screen and slides instead of the audience.

Your role as a speaker, however, is to entertain and engage the audience – to get them involved. If you know your slides and subject well you can shift a lot of your focus away from the screen and onto the audience.

Following are a few ideas to consider to become more audience focused and get them involved in your presentation:

1. Start with energy.The best way to get your audience involved is to start with energy. Try not to start with administrative-type information, such as your bio or your agenda for the presentation. Hopefully someone else introduced you before you went on stage, but if not consider saving your background information and agenda, if discussing it at all, until after your opening.

Your opening sets the tone for the audience. While they want you to succeed as much as you do, if you don’t get them excited out of the gate, it will be much more difficult to pull them in later in your presentation.

Think about how rock bands typically start off their show. They don’t begin by introducing all the members of the band or telling the audience what songs they are going to play. Rather, they usually jump immediately into one of their more high-energy songs rather than a ballad or acoustic song.

Use the same approach and find a way to start your presentation with lots of energy. I’ve started sessions by singing part of a song; having a high-energy “walk-up” song, riding up to the stage on a scooter, running across the stage waving the U.S. flag borrowed from back stage and more. However you start your session, do it with energy and excitement. Put the audience on notice that you are “bringing” it that day and that they need to pay attention.

2. Ask them questions, even if rhetorical.Once you’ve rocked your opening, find ways to continuously get your audience involved.

One way is to ask them questions. For example, once when presenting to an audience of business executives in India and discussing the growth of mobile and smartphones, I asked them “How many of you used the alarm in your hotel room to wake you up this morning?” I had expected maybe one or two, but to my surprise perhaps 10-20% of the audience raised their hands. 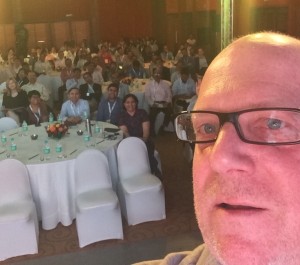 Taking a selfie on stage in Goa, India

While I didn’t get the response I was expecting, I then made fun of those who had raised their hands and asked them: “Do you realize there is an alarm on your smartphone?” Everyone laughed but more importantly the audience was getting involved as I asked questions throughout my session. They knew they were part of my presentation – they were on stage with me.

3. Use humor. Humor is one of the best ways to get an audience involved, which occurs simply through their laughter. Most of the best presentations or speakers you’ve seen probably incorporated humor at some level. Humor isn’t easy or come naturally for everyone, however.

Unless you are naturally funny, don’t overdo it – let it flow from your presentation. This approach works best for most speakers and won’t feel contrived or like you are simply cracking one-liners and trying out for a comedy night gig.

My story above about asking the audience if they used the alarm clock in their room to wake them up is a perfect example. My question was intended to prove my point of how smartphone reliant we have become – but when I got an unexpected response, I made fun of those that raised their hands (and myself for getting it wrong). It was natural and spontaneous and helped further open up the audience.

Another approach of course is to include at least a few slides in your presentation that will engender some laughs simply from the visual on the slide. I have a slide I use often that is a photo of a very large and fat cat that must way 30-40 pounds. I use the slide and cat image as a backdrop to discussing the need to “focus on the ‘big’ things.” I’m making a serious point with the slide, but the image of the fat cat always seems to make people smile and laugh.

4. Use local references. Localizing aspects of your presentation is another effective means of getting your audience on your side and engaged early and often. While in Chicago once I noticed the night before my presentation that the Chicago Cubs baseball team was in first place in their division. The Cubs haven’t won a World Series since 1908 and last appeared in the fall classic in 1945. So their lack of success in the post season is a long-running joke, but also source of lots of pain for local fans.

I grabbed a screenshot of the National League Central standings with a red circle highlighting the Cubs in first, and for good measure included one next to it showing the cross-town White Sox being behind in their American League division.

I used this slide as my opening after the title slide and shouted to the audience “How about them Cubbies.” It got some laughs and lots of hoots and hollers. I added “Remember this day!” and also asked how many people in the audience were “Cubs versus White Sox fans?”

This opening localization had of course nothing to do with the topic of my presentation, but it showed the audience that I did my homework and knew where I was It added a local flavor, got the audience involved with a few questions and generated some enthusiasm and laughs.

Sports teams are always an obvious way to localize an opening or aspects of your talk, but there are many others, including:

The idea is to be creative and have fun, but to connect with the local audience.

5. Make eye contact. When on stage speaking to an audience of hundreds of people and the lights glaring in your eyes, it can be hard to see the faces of people in the audience, let alone make a “connection” with them.

Try to find a few friendly faces scattered throughout the audience. While you are talking you should be moving about the stage and giving different areas of the audience your focus and eye contact. As your eyes scan the audience keep a look out for individuals that are nodding, smiling and who generally look extremely engaged and with whom you are making a connection.

Finding these supportive faces will help boost your confidence and help you ignore people doing work on their laptops, texting on their phones or nodding off. But just as important, when you look right at an engaged audience member, you can use that individual to enable you to “have a conversation” with the audience.

Another benefit of finding individuals who are nodding approval is that you can call on them to share their experiences or at minimum reference them: “I see several of you nodding, looks like many of you are seeing the same thing at your company.”

6. Don’t lecture, show them the light.While chastising or lecturing an audience can have its place and be effective if you do it in a fun way, generally people don’t like to be scolded. It reminds them of bad experiences at school or home.

If you want to make a critical point to the audience, and it is one that you know most of them are doing incorrectly, show them the errors of their ways. Audiences are not stupid and they are all generally aware when they are doing something the wrong way – that’s why they are in your session – to learn the right way.

A good approach is to show or explain contrasting examples – the right and wrong way to do something. If you are talking about customer service, for example, use images and personal stories to bring to life a bad experience you had at a store or hotel – and then contrast that with a great example.

The audience can easily relate to your examples and will often translate your stories in their head to their own good and bad experiences/examples – but then also their own personal, company or work shortcomings.

7. Find what works for you.In the end, the method or approach you use doesn’t really matter – as long as it works for you and the audience. The key is to use whatever “tools” you have to make the audience feel like they are part of a conversation and not a lecture. The more you are able to get inside the audience’s head, the more they will love and value your presentation.